At the east entrance of The Canyon, there’s a yellow and black pictorial road sign warning motorists to beware of rockslides in the canyon. If you slow down and look carefully, among the rocks is a falling cow.

We drove through The Canyon on a Sunday morning. It was a bright blue day, and the poppies were magnificent. Just west of the Richbar campground, the halfway point, we came around a corner, and in the middle of the road was a dead cow. Brown and full-grown, it lay on the double yellow line surrounded by rubble with all four legs pointing north. The cow had lost its footing on the steep green hillside and somersaulted hundreds of feet to its death.

Cows on the road can be dangerous. I know. I hit a black cow on a moonless night at 50 mph and survived. The cow and my car did not. I shudder to think a similar tragedy could happen in The Canyon, but I know it’s possible. We were lucky on that particular Sunday morning. It was daylight, and a motorist had flashed his headlights half a mile back, signaling trouble ahead. We warned others in the manner until we exited The Canyon and called 911. After an odd exchange, the operator dispatched the highway patrol.

We enjoyed our day in Bakersfield and forgot all about the cow. But on our drive home through The Canyon at dusk, we came around the corner and there it was. Judging by the dark smear on the asphalt, someone had dragged the cow by its legs to the side of the road and placed a large orange traffic cone on top of its bloated body.

I don’t want to know what happened after that. I can only imagine the corpse remained overnight until CalTrans could dispose of the body in the morning.

When I drive in The Canyon and see cows grazing on the mountainside, I can’t help but feel a little paranoid. Not only do I watch out for the line-cutters, slowpokes, and risk takers; I watch for falling cows. 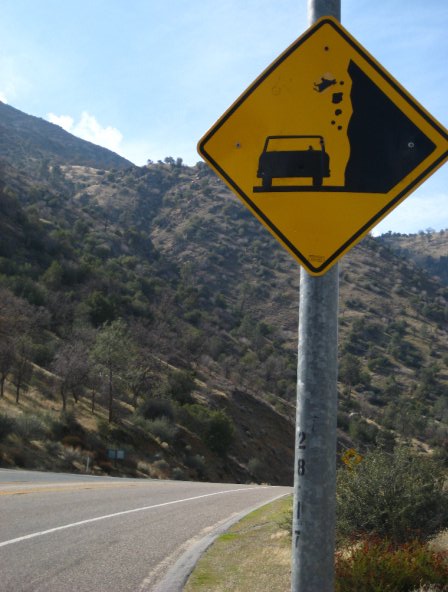