I thought it would be easy to sit down and describe what happened to me, but it wasn’t. Keep in mind that my story pales in comparison to those told by neighbors and strangers, especially by those who lost everything in the Erskine Creek Fire.

My house stinks. I must be getting used to it, which means I probably stink, too. We’ve been cleaning for days, deep cleaning, fire cleaning. Last night we rested with a pint of Ben & Jerry’s Phish Food and watched Ancient Aliens. There we were in our stinky living room, sitting on stinky furniture with our stinky cat, watching a strange show about pyramids in Antartica.

Lookie-loos are everywhere. They parade up and down the streets in their clean cars, gawking at the devastation. I don’t blame them. It’s hypnotizing to see house after house reduced to ash.

Here is what happened, from the beginning.

I was at my desk, working on a rush job for a client, when I glanced up from my computer screen and noticed the lighting outside was an eerie shade of orange. Fire orange. Hernia Dog and I went outside to investigate.

Smoke was coming from the west, up and over Cook Peak Mountain, driven by gale force winds. Tiny spotter planes circled high above the giant plume like gnats. As the sun filtered through the smoke, it cast a burnt glow. Unfiltered, it was bright white. I had never seen anything like that before. It was beautiful, yet terrifying.

Do you see the road in the photo above? It goes up to the top of Cook Peak Mountain. Do you see that truck? It belongs to my neighbor. He lives in the last house on my street. Beyond his property is BLM land. People like to go up that road to ride dirt bikes, target practice or admire the view of the valley from the flat spot. That’s also where the neighborhood bear lives.

The top of Cook Peak Mountain was now on fire. I could see the flames as pine trees exploded on its crest. I could hear air tankers and helicopters, now, but I couldn’t see them through all the smoke. Then it occurred to me, where were the fire trucks? Who was going to protect my neighborhood? Where were the hotshots?

I walked across the street to my neighbor’s fence line. Like me, she was looking at the smoke and the flames, wondering what to do. Surreal moments catch you off guard. “Looks like the fire is getting close.” “Sure does.” “The wind is blowing it right at us.” “Yeah, that’s probably not good.” “Do you think we need to evacuate?” “Maybe.” “Shoot, I don’t have a car.” “Where are the fire trucks?” And then we talked about our animals, deciding we’d save our dogs and horses and the rest would be on their own.

The wind was blowing over 40 mph and blasting the fire towards us. It had charged down from the top of the Cook Peak Mountain and was now less than a quarter mile from my house. I went inside and called David. He said to call my in-laws in Wofford Heights because they could help me evacuate much faster than he could. David was in Bakersfield with our only vehicle. 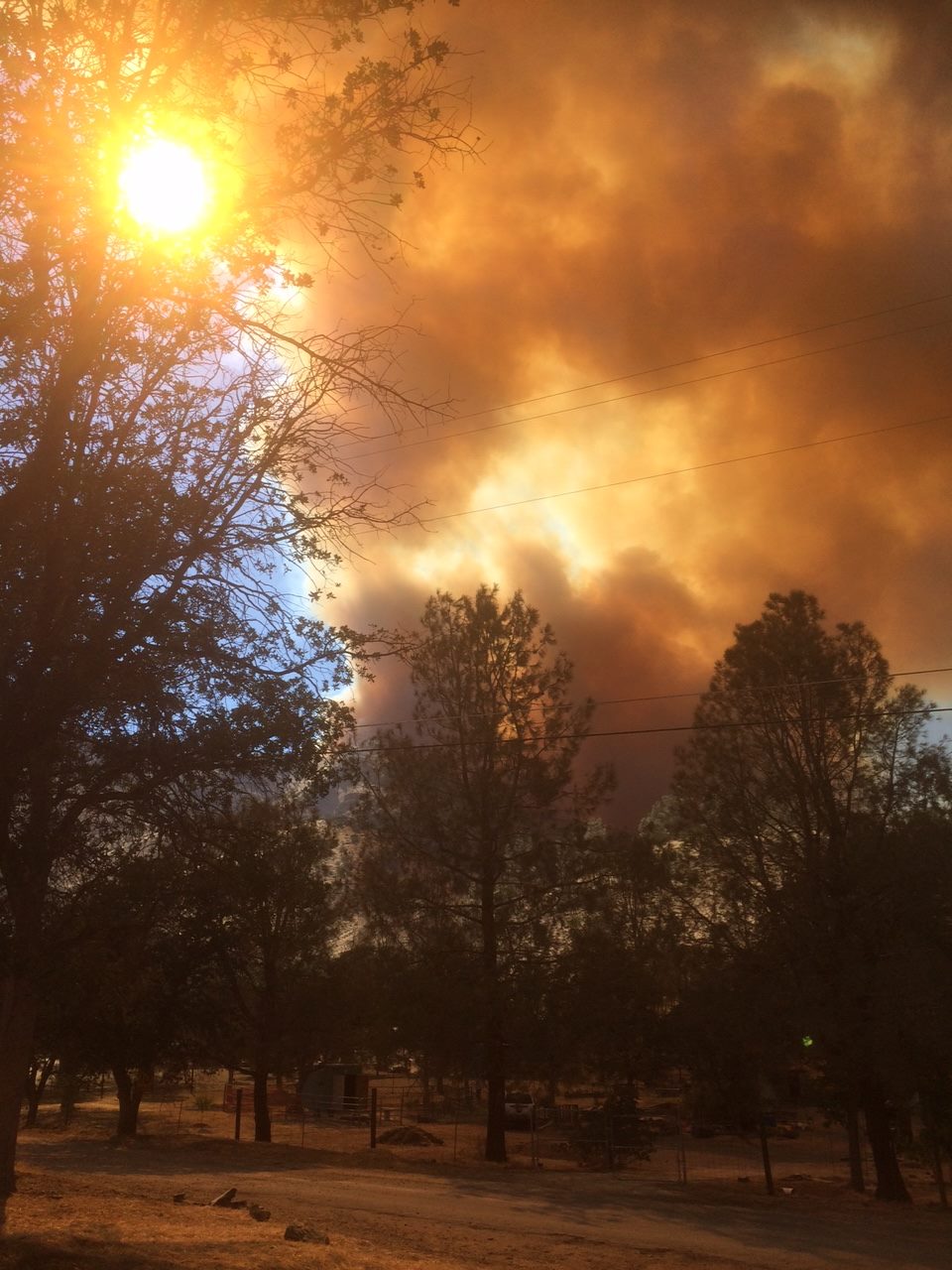 I collected my computer equipment, medications, and my wedding album and put them inside the front door for evacuation. I felt nervous because my in-laws were at least 20 minutes away, and the fire had already reached Cook Peak.

Outside, the wind roared like a freight train. I looked out the art studio slider, and the fire was on our lot next door. In less than ten minutes, the flames had traveled from the top of the ridge, down into my yard. Burning pine cones and embers fell from the sky and splattered like napalm, starting more fires. The side yard, back pasture, and surrounding homes were on fire. I knew I had to leave, even if it meant walking out alone with nothing.

I stood at my front window, waiting or my in-laws to appear out of the smoke, but they never did. Instead, a small green fire truck drove past my house and then disappeared into the smoke. There is a fire hydrant in front of Cook Peak. I thought for sure he’d stop, hook up a hose and fight the flames, but he didn’t. A sheriff car appeared. He saw me in the window and soon he was at my front door telling at me to leave my home and save my horse. That’s when all the smoke alarms in the house went off as thick smoke poured in through the open windows. My eyes and lungs began to burn. I found Hernia Dog cowering in the bathroom upstairs. I couldn’t find his collar or leash, so I put a belt around his neck and dragged him outside. A neighbor was in my yard talking to the Sheriff. I asked him to watch my dog while I tacked up my horse.

Amber was standing in the pasture; her eyes fixed on me. The fire burned a couple of yards behind her. I knew I had to appear calm for her sake. I spoke softly and buckled her halter onto to head, but I couldn’t find a rope to lead her. All I could do was hold onto the side of her head and hope she was okay with that.

The fire was now in front of Wilma’s pig pen and blocking our only exit. I walked Amber to the end of the pasture and tore down a section of the barbed wire fence to escape. Sadly, I  knew I could not go back and get Hernia Dog from my neighbor. There was no way I could control a dog and a horse at the same time in the midst of so much chaos. Amber and I walked out of the firestorm and into the unknown.

As Amber and I walked along the road, fire trucks and sheriff cars drove into the smoke with flashing lights and sirens. That’s when I realized the emergency personnel were not there to save property. They were there to get as many people out alive as possible. The massive fire was out of control, and there was nothing anyone could do to stop it.

I spoke to Amber as we evacuated. I told her what a brave girl she was and how we were going for a walk to get some fresh air. Her senses were heightened, but I was calm, and she sensed that. Moments after I snapped the photo above, smoke enveloped us.

I had to get us to higher ground so we could breathe. That’s when a man with a horse trailer stopped and asked if Amber needed a ride. He said he was only evacuating horses and would come back and get her. What about me? We kept walking higher in elevation towards cleaner air until the man with the horse trailer found us and took Amber away.

I walked back to the main road and waited for my in-laws, in case they were driving around searching for me. I stood with my shirt sleeve covering my mouth, swirled in smoke, coughing and watching car after car pass by me. I could tell everyone in Squirrel Valley was evacuating at the same time by the crazy way they were driving. I knew I had to get out. The fire was blasting towards me, again.